Not all bikes listed on our website are assembled and ready for same day pick up.  Please wait for a confirmation e-mail before coming in to pick up your purchase! 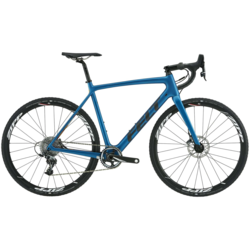 Felt Bicycles FX Advanced+ Force CX1
$4,499.00
The FX is a purebred race machine, created specifically for the rigors of the cyclocross racecourse. Its no-frills, purpose-built design was developed for one thing: speed. Incredibly lightweight, stiff in all the right places, and unbelievably agile, the FX will elevate every racer’s performance. And that’s not an unsubstantiated claim by any means — the FX is a two-time winner of the cyclocross world championship in the ultra-competitive Elite Men’s division. So if it delivered the very best racer in the world to back-to-back rainbow jerseys, just think what it can do for you. The top step of the podium awaits. Go and take it. Whether you’re racing for a rainbow jersey or just aiming to beat your buddies at the weekend slugfest, you need a bike that will elevate the results of all of the blood, sweat, and tears you put into training. The FX is that bike, and once you take it into the trenches with you, no other bike will compare. - Lightweight, impeccable handling, and massive power transfer efficiency - Internal cable routing for clean aesthetics and protection against the elements - SRAM Force CX1 drivetrain - Zipp handlebar, stem, and seatpost - Zipp 30 Course wheels 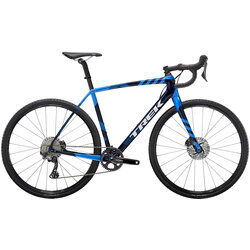 When the chips are down and the mud is flying, you want a no-holds-barred cyclocross bike that is up to the challenge.

The Trek Boone 6 has been developed from racing in the mud of Flanders and the hardpan of the Midwest. A light and nimble feel along with a rugged design allows the Boone 6 to fly up hills and still take a beating on rough, technical courses. Make no mistake, this isn't a "pretend" 'cross bike that was really meant for gravel touring. World Cup victores and national championships tell the story.

Trek's engineers could have rested on their laurels after Katie Compton won her record 13th national championship on a Boone. But they didn't. They wanted to improve the Boone from its first generation, and make the bike even better for a wider range of riders and courses. Trek kept the same carbon fiber "recipe" as last year: 600 Series OCLV carbon fiber, ensuring a featherweight frame with incredible torsional strength. Start-line sprints and steep inclines require a bike with a rock-solid feel when stomping on the pedals, and the Boone delivers with a flex-free BB90 bottom bracket. A tapered head tube adds precision to the Boone's handling on technical courses while 12mm thru-axles front and rear improve lateral rigidity for carving corners at high speed. The IsoSpeed decoupler found at the seat tube/top tube juncture uses a pair of cartridge bearings to add more vertical compliance to the Boone's ride quality. Rough courses can tire anyone too quickly, but the Boone's IsoSpeed technology takes the edge off the harshest surface elements. The Ride Tuned seatmast and cap gives the bike even better compliance compared to any garden-variety seatpost. Up front, the engineering team at Trek have added the same front IsoSpeed decoupler found on the Trek Domane. The Boone now feels much more balanced without producing a distracting "pogo stick" feel from the handlebar when hammering out of the saddle. A flattened top tube is more comfortable when shouldering the Boone, and vanishing fender mounts make the bike an easy choice for commuter duty in the off-season. Flat-mount disc brakes and internal cable routing give the Boone a clean, refined look, while an adjustable 3S chain keeper prevents dropped chains (and possibly lost races) on the roughest of race courses.

Boone 6 Disc is a race-ready carbon cyclocross bike that excels in demanding off-road conditions. It's built with a sturdy Shimano GRX 1x drivetrain and powerful disc brakes for performance on bumpy, muddy terrain, and the lightweight carbon frame with Front and Rear IsoSpeed delivers traction and comfort during every race. It's right for you if... Pavement, schmavement. You live for the rough stuff. You want a bike that's proven on the cyclocross course and capable of gravel-only adventures. You're looking for every smooth advantage, like Front and Rear IsoSpeed and a compliant carbon frame and fork. The final word Boone 6 Disc is purpose-built for crushing cyclocross. But in its spare time, it eats up rugged roads like nobody's business thanks to gravel-taming parts like a GRX drivetrain and fatigue-reducing Front and Rear IsoSpeed. Why you'll love it - Shimano GRX is designed specifically for rough rides—you get great chain retention and a better grip on the hoods and levers - This bike was designed with input from cyclocross royalty, including World Champion Sven Nys and U.S. National Champ Katie Compton 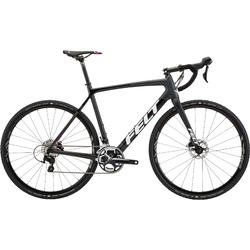 Felt Bicycles F5x
$2,499.00 $2,799.00 11% Off
The F5x breaks the mold when it comes to performance and perception. The most value-laden carbon model in the Fx Series, the F5x features a UHC Advanced + TeXtreme carbon frame and fork, making for a stiff and efficient pedaling platform that also reduces the rough hits and chatter found on the roughest cyclocross race courses. Built with a Shimano 105 drivetrain for smooth shifting and dependability, the F5x also comes with tubeless-ready wheels and Schwalbe X-One tires to help reduce flats and allow you to dial in your preferred tire pressure for the muddiest and wettest conditions. 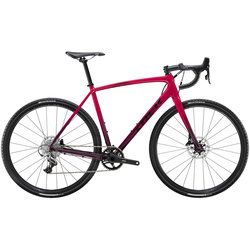 Trek Crockett 5 Disc
$2,400.00
Crockett 5 Disc is the perfect high-value cyclocross companion. It's designed with cross-specific details, like a 1x11 drivetrain and a lightweight frame that's easy to carry over barriers, but it's so much more than just a cyclocross bike. The advanced alloy frame looks and handles like carbon, and it's equally at home on gravel and your morning commute as it is on the cross course. It's right for you if... You're rolling into the cyclocross scene and looking for a ride that's everything you need and nothing you don't. Or, you're looking for a great all-around bike with road-style bars that's perfectly suited for everything from cyclocross races and gravel roads to commutes and rail trails. The tech you get A lightweight and strong 300 Series Alpha Aluminum frame with shaped tubes, Invisible Weld Technology, extra tire clearance, 12mm thru axles, an IsoSpeed Cross full carbon fork, powerful flat-mount hydraulic disc brakes, and the simplicity of a 1x11 drivetrain with SRAM Rival shifter and derailleur. The final word Crockett 5 Disc is a race-ready cyclocross bike with an advanced alloy frame, but it's a lot more than that, too. Whether you're gearing for a cyclocross season or want a versatile bike that stands up to the rigors of the burliest gravel roads and commutes, Crockett truly does it all. Why you'll love it - Carbon looks and handling, alloy price point: Invisible Weld Technology and shaped tubes for sleek looks, light weight, and incredible handling - The full carbon IsoSpeed Cross fork soaks up the chatter from rough roads, gravel, and cyclocross courses - Internal cable routing with Control Freak Cable Management keeps things smooth, quiet, and clean
Page 1 of 1