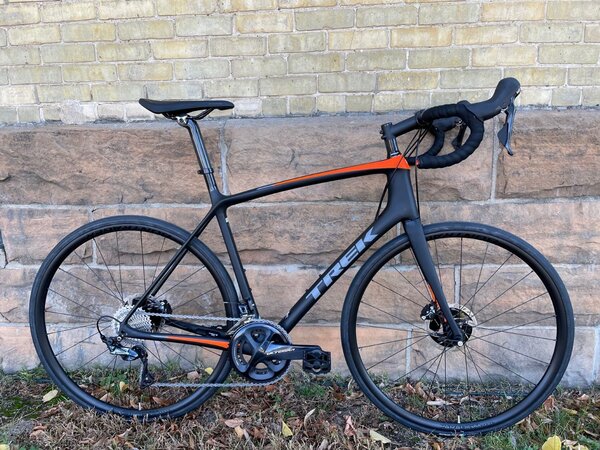 When the first-gen Emonda SLR appeared, jaws dropped everywhere. It was light. Like, science-fiction light.

Trek has somehow managed to make a lighter version of the Emonda's SLR frame, but can run disc brakes.

Let that soak in for a second. The disc-brake-ready version of the Emonda SLR frame weighs in at an absurd 665 grams for a 56cm frame (H1 fit). The disc brake fork is also an all-carbon unit, and weighs only 350 grams. That's actually lighter than the previous-gen caliper-brake version. How did the mad scentists at Trek in Waterloo do it?! They started with a revamped version of their in-house 700 Series OCLV carbon fiber material. The qualities of this year's 700 Series OCLV carbon is different due to changes in raw material, layup schedule and resin formulation. With the aid of in-house digital prototyping, the Emonda SLR's frame design also went through refinements from stem to stern. The hourglass-shaped top tube and stouter chainstays are the more obvious clues to the new Emonda SLR's changes, while 12mm thru-axles add torsional anchor points for better power delivery and handling. The tapered head tube and BB90 bottom bracket are still there, but they function better with the improved frame architecture and material "recipe". Aerodynamics didn't enter into the equation; only lightness and ride quality mattered when the Emonda SLR Disc was under development. Internal cable routing keeps the Emonda SLR Disc looking sleek, while an aperture in the left chainstay for a DuoTrap S speed/cadence sensor (sold separately) eliminates the need for clumsy zip-ties. The ride quality was improved with the new 700 Series OCLV, giving the Emonda SLR a smoother feel over rough pavement.

The 50cm example in black/gunmetal we have is an H1 fit, rather than the more upright H2 fit.