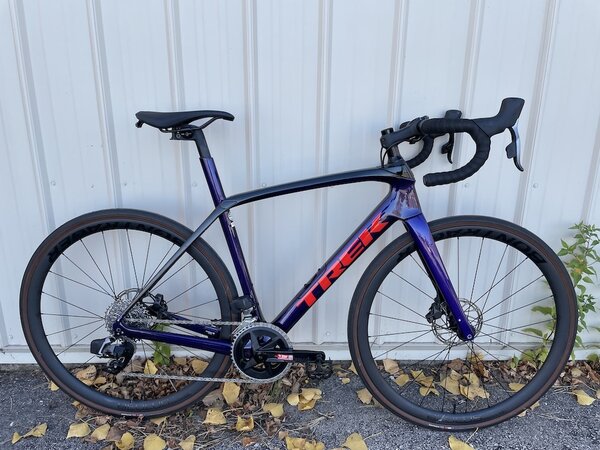 The design team and engineers at Trek wanted to keep the best elements of the previous Domane SL, but improve the bike's overall performance in a wider range of conditions. From terrible pavement to relentless hills to gusty crosswinds, the newest Domane is better everywhere. The frame and fork were given an aero treatment, allowing it to slice through the wind with less effort by the rider. Brake hose routing tucks in behind the stem, making the bike even sleeker. A Kammtail shape was used at the back of the frame's down tube and seat tube, reducing overall drag in headwinds. Aerodynamics weren't the only thing considered for the updated Domane SL. Clearance for 38mm tires has been added, allowing for wider, more adventurous rubber. A storage compartment in the down tube practically eliminates the need for a tool kit bag under the saddle. A single lever opens it, and a port for a multi-tool (sold separately, along with the rest of the flat repair kit) sits just inside. This feature lowers the bike's center of gravity, improving handling on poor pavement and high-speed turns.

SRAM Provides the 12-speed Rival/Force eTap AXS electronic drivetrain components, delivering lightning-quick operation and a long service life. Wireless operation eliminates the need for cable routing, keeping your bike looking clean and sleek. The SRAM Rival crankset boasts a 46/33T chainring combination paired with a 12-speed 10-36T SRAM cassette. Yes, that's a 33Tx36T gearing combo for climbing ridiculous inclines! The 46Tx10T top gear (a higher gear than a 50Tx11T) won't keep you spinning too fast on the downhills either. Each derailleur has a rechargeable battery that will run for up to 500 miles per charge. They're interchangeable, and can be swapped in case one runs dry before the other and you're not home yet. A SRAM AXS smartphone app allows you to check battery charge levels, update the firmware, and alter the shifter operation for righties and lefties on the Force AXS dual-control levers.

A SRAM AXS battery charger is included with the purchase of this bicycle.