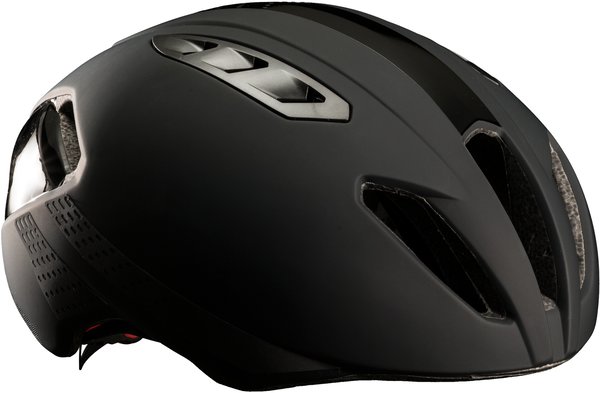 Developing an aero road helmet isn't easy if you want to do it right. Instead of plugging the holes on a current road helmet and calling it a day, the helmet design team at Bontrager started with a clean sheet of paper. The quest for balancing low drag, light weight, protection and effective ventilation was taken up, and the results are stunning. The overall shape of the Ballista MIPS originated with the aid of Computational Fluid Dynamics technology, allowing the engineers to refine the aerodynamic shape before a single prototype was molded. The deep interior channels of the Ballista MIPS start with three carefully refined intakes at the front, and run uninterrupted through the length of the helmet. The exit ports at the back are slightly larger, producing a diffuser/extractor effect that accelerates air movement through the internal channels. Two rows of "smokestack" vents are found at the top of the helmet, keeping the wearer comfortable during low-speed efforts like steep climbs or even just recovering at long stoplights. With the intakes and exhaust ports at the front and back, the Ballista MIPS is less likely to give the wearer a curious sunburn pattern on shaved scalps and bare heads.

The Bontrager Ballista's Multidiretional Impact Protection System -or MIPS- liner was developed with the aid of Scandinavian head injury specialists that examined how traumatic brain injury is caused. The liner itself adds only a few grams to the Ballista helmet and isn't noticeable when worn. Rotational forces delivered to the wearer's brain are reduced in the event of oblique impacts with a MIPS liner. The Ballista MIPS still conforms to CPSC impact standards. If you experience a crash, a MIPS-equipped helmet should be replaced. MIPS does not improve the crashworthiness beyond the initial impact.

The interior of the Ballista MIPS features agION antimicrobial pads for a comfortable feel as well as being stink-free. Size adjustment is handled with a Boa fit system's one-handed twist knob. The angle of the fit system can be adjusted with three different settings to fit more head shapes.

The Ballista has been put through the wringer of various professional reviewers, and it won a 9-helmet comparison test in a review from Bikeradar.com!